Stephen has over 20 years of experience as a specialist criminal practitioner.  He defends and prosecutes in all aspects of Crown Court work, particularly in cases involving sexual offences and young and vulnerable victims or defendants.

Originally practising in Liverpool chambers, he and his family relocated to the Nottingham area where he joined 1 High Pavement Chambers in 2011.  He was one of the founder members of Castle Gate Chambers in 2020.

He has been a Grade 4 Prosecutor for 10 years and prosecutes and defends a wide range of serious criminal offences. As a specialist in rape and serious sexual offences for 16 years, he is now regularly instructed to prosecute the most serious and complex sexual offences including those involving child complainants and defendants.

He is regularly instructed in the following areas:

He has a reputation for being a persuasive, cogent advocate who gets results. Stephen is known for being a robust but fair prosecutor and consequently one that a jury trusts to lead them through a case. With those whom he defends, he quickly builds a relationship of trust as they recognise him as someone who will fight their case with vigour. He prepares his cases thoroughly and ensures that they are presented in a jury-friendly way to maximise the prospects of success. He applies an analytical approach to his cases and pays close attention to detail, taking care to ensure that relevant material is considered and deployed. When prosecuting cases, particularly those involving the young, the vulnerable and those alleging sexual abuse, he appreciates the need to gain the trust of the complainants and their families; he recognises the importance of working as part of a team with defence or prosecution lawyers and police officers from the early stages of a case. 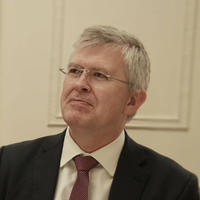 Stephen has worked and has travelled extensively in North America; he enjoys hill and mountain walking which has taken him on a couple of expeditions to the Nepalese Himalaya.  He spends time dinghy sailing with his children and more recently ocean cruising: he achieved his Day Skipper Licence in 2019.  A past life as a scuba diving instructor means that when the sailing goes wrong he can share with his children the wonders of the ocean floor.

R v W: complex prosecution of a man who committed serious sexual and coercive crimes against three wives over 15 years . The case required a close working relationship with the CPS and the police over many months to prepare and manage the case and witnesses. It involved highly vulnerable complainants and difficult issues of consent/belief in consent. The Defendant was convicted on all counts and sentenced to life imprisonment.

R v A: Instructed to prosecute a case an attempted murder in which defendant was alleged to have purchase petrol and hour before pouring boiling water over him whilst he slept causing significant burns to much of his body; she then set fire to the flat with the petrol as she left to take him to hospital.

R v M: Instructed to defend a man with significant mental illness accused of attempted murder: he was caught on CCTV stabbing a man 22 times in an unprovoked attack. Mental health deteriorated rapidly after arrest. Issue: mens rea at the time of attack.

R v R: Instructed to prosecute a man who attempted to kill his partner because she ended their relationship. The case turned on consent: the relationship had involved consensual sadomasochistic sexual practices and the defendant claimed that his attempts to hang the complainant were a continuation of this behaviour rather than an attempt to kill.

R v B Instructed to defend a man who was accused of having raped and sexually abused his daughter from early childhood well into adulthood.

R v Wolenski et al: Instructed to prosecute case in which five men were each accused of having raped a female who became progressively more intoxicated as the night progressed where the issue was consent/belief in consent.

R v Barrowman: Instructed to defend a man accused of acquaintance rape together with allegations of strangulation, biting and other violence. Much of the case turned on complicated medical evidence from four doctors of different specialities and a pathologist. Two juries could not agree; a third acquitted.

R v Murphy, Ashcroft and Moore: Instructed to prosecute a death by dangerous driving case where a car stolen to order hit and killed a cyclist. One of the issues in the trial was which of the defendants was driving the car at the time of the collision: each blaming another. The case involved careful reconstruction of the route travelled by the stolen car using telephone and cell site analysis and eye witness accounts to prove the driver’s identity.

R v P Instructed to prosecute a man who escaped from a psychiatric hospital whilst under observation and who, a year later and again two years later, attacked the psychiatrist who had detained him at his home. Case involved issues regarding mental health, mens rea, fitness to plead and identification.